Oscar Akermo is a Swedish-born tattoo artist who started tattooing at the age of 14. Oscar entered the American tattoo market with a mission to disrupt it with innovative tattoo equipment and education for newcomers with the launch of his Black brand.

Among millions of tattoo artists and masters in every corner of the world, not many can boast of being experts before they hit puberty. Oscar Akermo is a Swedish tattoo artist who started working in the industry when he was just fourteen years old.

Oscar Akermo was born in Uddevalla, Sweden. As a child, he was drawn to various art forms. From sewing his clothes to doodling and drawing to creating unique music, Oscar’s early childhood was filled with inspiration and creativity.

Just a year after entering the tattoo industry, he built his first tattoo machine at the age of 15. Little did he know back then that he would be called one of the most prolific tattoo artists of his time, but his talent, drive and passion were undeniable from the start. 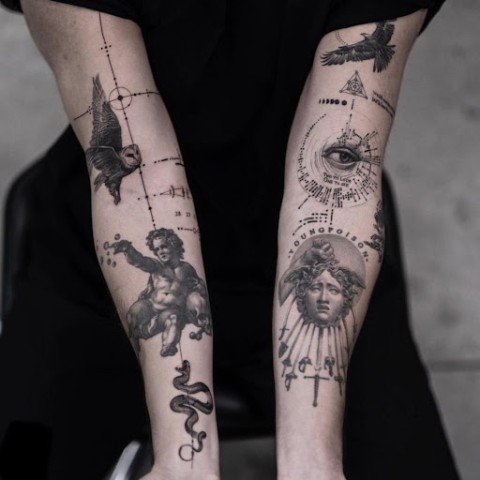 Two years after completing his education in Uddevalla, Sweden, Oscar began touring the world showcasing his tattooing skills at conventions and feature shows around the world. In early 2016 he was recruited to Bang Bang Tattoos as one of the first European artists. Young and eager to learn every secret of his craft, Oscar began his US career at the age of 21.

On the subject of his passion for tattooing and how it makes up more than half of his life, Oscar was featured in a documentary by ORG:

“I started tattooing because I wanted tattoos. I had always drawn, always been creative in some way. I’ve made crossbows and toys out of wood and scrap metal and I’ve always drawn the blueprints for everything I’ve done and when the time came to get interested in tattoos I figured I should do it myself tattoo.”

Oscar continued to talk about his early experiences, sharing that his first attempts at tattooing were when he was just ten years old.

Oscar Akermo is now 27 years old and runs his business as a tattoo art entrepreneur by launching a state of the art tattoo equipment and education brand called Black Tattoo Systems.

For more information about Oscar Akermo, visit his official website.